Designing an all-in-one community platform for vegans in Spain

Veganism is a movement, not just a food movement, that has grown over the years in Spain. The growth of veganism is remarkable in most of the developed countries of the planet, and in Spain, the demand for vegan services for its consumers is currently increasing. In countries such as the UK it is estimated that veganism has grown by 360% in the last decade, according to GlobalData.

There is a clear growth of the vegan community, but currently there’s a lack of vegan platforms, where you can learn about this movement, which became the trigger point to develop Vegan Land. Vegan Land was my end of degree project for my bachelor studies, and the purpose of this app was helping vegan users in Spain to learn new recipes, being documented and to be able to order vegan food delivery, everything in an all-in-one platform. 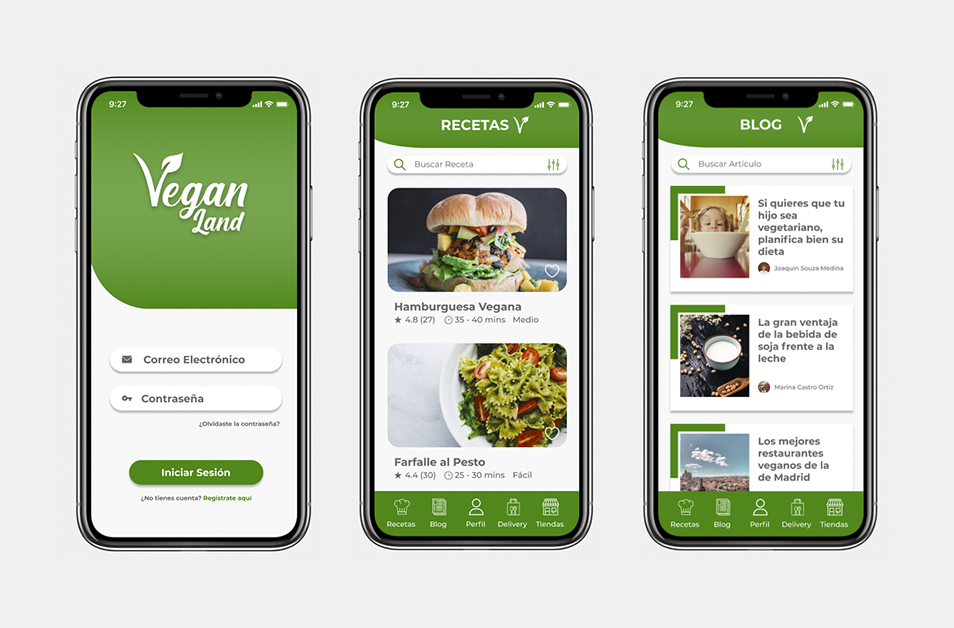 After finding many studies that showed the growth of veganism in Spain, and in other western countries, I began researching the most popular vegan apps and platforms that consumers were using at the time I was developing my project.

There are already smartphone apps focused on the vegan sector, such as HappyCow (a search engine for vegetarian and vegan restaurants), Vegamecum (vegan recipes) or AptoVegan (an app that tells you whether a product is vegan or not), but today there is no app that encompasses as many solutions for vegan consumers as "Vegan Land". This comparison, combined with a SWOT analysis, made the conclusion that Vegan Land had potential to get into the market and compete with the current platforms.

Being a fairly young audience who use new technologies such as smartphones and social networks on a daily basis, therefore, they are used to using digital interfaces, due to the fact that they are mostly digital natives. Given their level of interaction with digital interfaces, it is necessary to use interfaces that are usable and that use common elements of other youth-focused applications such as Instagram or UberEats, giving priority and importance to iconography and visual content, and iconography and visual and interactive content.

The app turned out to have a lot of functionalities, which is categorizable under “Recipes”, “Articles”, “Profile”, “Take Away”, and “Shops”. I initially defined the structure and hierarchy of the sections of the app, in order to later on define the user flow and the wireframes of the interface.

After defining the architecture and the user flow, I created the wireframes and digitalised them later. I decided to wireframe the primary screens of the interface and used this build blocks for the secondary pages.

Finally, I developed the prototypes of each of the pages of the interface and tested them with vegan users, in order to obtain feedback and iterate over it.

When you access the Recipes section, the user is shown by default the recipes filtered as "Most Relevant" of the last few days, but the user can change the search filter to "Most Recent" or "Oldest".

Each recipe comes with multimedia content of the recipe, a list of the ingredients needed (as well as their respective quantities), a step-by-step explanation of how to make the recipe, and and then a section at the end of the recipe where you can rate with stars (5 stars being the highest rating) what you think of the recipe. recipe. In addition, as an optional measure, there will be recipes that will have video tutorials so that the user can see exactly how everything is prepared, improving the user experience.

This is the section in which users can include an avatar image, manage their account, access them manage their account, access the data protection policy, legal notice, include their bank details for the bank details for the "Take Away" section or change their password. In this section, the user can access the recipes he/she has saved, write his/her own recipes to share with the rest of the own recipes to share them with the rest of the users, and re-read those recipes that the user has saved. recipes that the user has saved.

The user has the possibility to order vegan food at home. home delivery. In this section you are asked to activate the location of your smartphone. When you do so, a map of the user's location and surroundings will be displayed and the closest vegan restaurants to the location will appear. The layout and structure follow the standards of other delivery apps. At the time of purchase there is the option of giving a small tip, which will go to a non-profit animal welfare organisation.

When you active your location there will appear in this section the closest vegan commerce’s with information about their services, as well as their address and contact information.

Developing Vegan Land has been an exciting project, giving me the opportunity to give shape to an idea that I would like to develop in the future. Vegan Land has been a complete challenge both on a professional and personal level, as it was my first big UX/UI design project. If I could go back to the project, I would add a series of interactive approaches that I’ve explored in the last year and try to make Vegan Land a much more fun-interactive platform.

This project was executed by myself for my end of degree project for my Bachelor in Multimedia Design, at the Universitat Oberta de Catalunya. The duration of the project was of 12 weeks, and the many activities executed in this project were UX/UI design, research, concept development and user testing.