Designing a Speculative Design Artifact for 2049

During my academic year at the Master Digital Design of the Hogeschool van Amsterdam we were given a Speculative Design assignment. We were initially given the task of developing the morning routine of a character in 2020, and then we had to do the same for that character but in 2049 with a dystopian context, where there’s been a recession worldwide.

After developing these two tasks we were informed that the challenge of this assignment was to develop an artifact for this future scenario that had to do with everyday mundane activities and that fit within this dystopian context.

When we obtained the brief from them, we were in the initial stages of the pandemic, and since their sales models relies heavily on a face-to-face model between their ambassadors and their potential consumers, they were exploring ways to increase their visibility. We were asked to develop a proposal “out of the box” that could increase their visibility in the Netherlands while highlighting their brand values.

Looking for Areas of Intervention

With our scenario, we decided to highlight the dramatic effects that climate change had in the world of 2049. We took the most important elements of both our scenarios in 2020 and 2049. After developing the scenarios, identifying the design space, and debriefing the assignment, we developed a prioritisation grid where we wrote the key elements of our 2020 storyline and determined their value for humans and the level of accessibility.

We started an ideation session with the Daydreaming technique with these keywords. After developing these concepts, we did technology research to determine how feasible they were to develop. Afterwards, we plotted the ideas in a new prioritisation grid we used to see which ideas were feasible and interesting for the next iteration.

We started externalising in the form of sketches the ideas that were strong and feasible, and we brainstormed on them until we decided to choose the smart plant concept, Mirai. We kept iterating over this idea and did a series illustration of how Mirai would looking like and its functionalities. We also did a technical drawing with the technologies needed for the development.

The 2049 scenario we developed was a dystopian society where since 2020 there was a global recession that enabled the economic growth of the Netherlands. This led to an increase in the use of raw materials and nature, leading to a notable deforestation on the nation. The role of Mirai was to have a smart plant that would tell the user when to water the plant, or to notify when the air quality of the house wasn’t suitable. The role of this product is to highlight the importance of nature and encourage citizens in restoring the Dutch ecosystem thoughtfully.

We developed a series of 3D Prototypes to show how a final product of Mirai would look like. Mirai is an artefact that allows the user to reflect critically on how important and fragile nature is within the circle of impact by human creation. 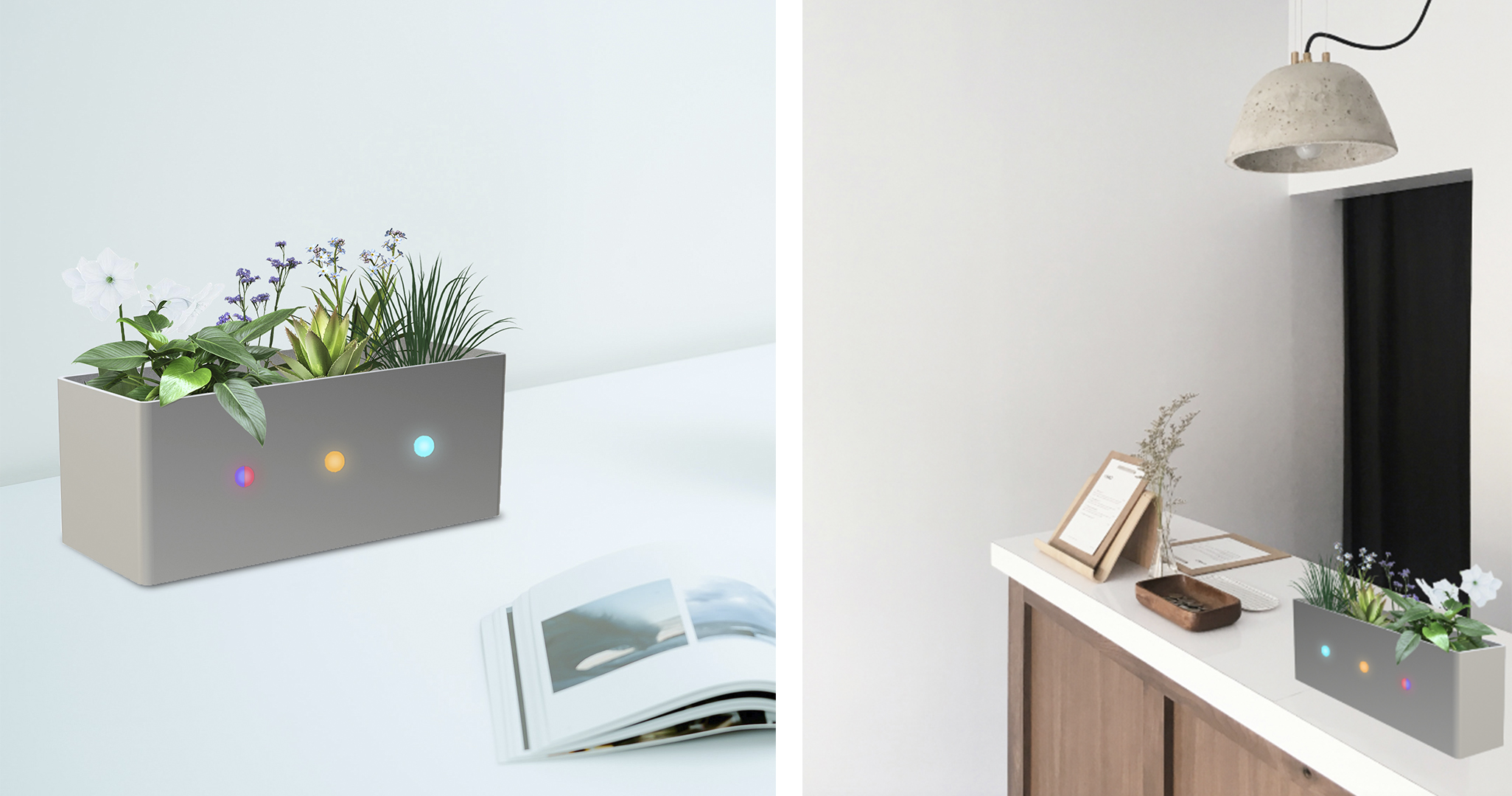 Finally, we developed a working prototype of Mirai made with sensors and with an Arduino board that, when allocated with a plant, if the moisture levels of the plant are low, or when the air quality are low, the lights of the Arduino notify the user.

This challenge was personally insightful, since it was the first time, I explored speculative design, as helped me to develop techniques that can help develop concepts and products on a scenario that could potentially happen. On the other hand, I would’ve liked to explore more and develop on a higher fidelity level the final product, but since this was a 3 weeks project that we were doing alongside other projects, me and my team didn’t had the enough time to develop the final product, and that’s why we focused more on the concept design.

This project was executed with 2 other digital designers: Carmel Wilderink and Jim Kraan, and the duration of the project was of 3 weeks. This project was part of an assignment that we were given during our academic year at the Master Digital Design programme of the Hogeschool van Amsterdam. My contribution of this project was the concept design & development, and coding & development of the working prototype.